Vuelta a España – Stage 14 – Larry Warbasse – I like the stages with more rolling passes, even with the steep gradients – 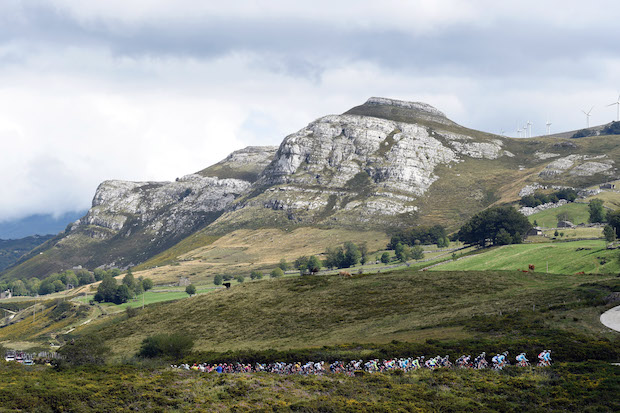 All the ingredients were there to ensure that the finish of the fourteenth stage of the Vuelta would be epic.  The fog and cold that never left the top of the Fuente del Chivo only succeeded in reinforcing the atmosphere.  That may be why the leaders at the finish could easily be compared to warriors.  That impression was enhanced by the fact that the stage winners escaped the peloton after fifty kilometers of racing, and were never seen again before the finish line.  It must be said that the escapees were very strong to have been able to withstand the pace that Astana set for the chase.   At the end of the day, Alessandro De Marchi (BMC) was able to withstand everything.  With two kilometers to go, the Italian rider pulled away from his breakaway companions, and flew away to win all alone.   IAM Cycling meanwhile adopted the opposite course, which essentially meant staying in the bunch.  The riders from the Swiss professional team, absent from the front while the breakaway was forming, had to be content to follow the tempo imposed by the contenders of the overall leaders. 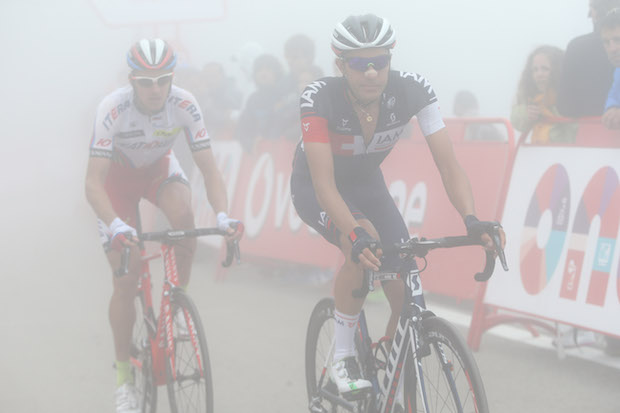 With purple lips and shivering at the finish, Larry Warbasse lived a hard day on the Tour of Spain.  But after a warm, reinvigorating shower, the young American was happy to give his impressions of the stage.  We thought this stage to be very hard, and we dont have any different expectations for the coming days, the realistic Warbasse explained.  This Saturday and the two stages coming up will have very steep finishes, some of the steepest of the whole Vuelta.  This stage was particularly long with 230 kilometers clicked off on the computer, which was enhanced by the 15 kilometer roll out.  My aim, and that of the whole team, was to get into the break if a big enough group decided to take off.”

“I tried, but it was really hard to catch the right opening.  Once again, the lead group was really slow to form, which makes the start of the stages very nervous.  But I do not intend to give up, and I will try again in the next stages.  I prefer the climbs that are long, but maybe only slightly harder than the last col.  Today the roads were wide, and in the end there was a lot of skimming out the back at the foot of the climb because everyone was going so fast.  I like the stages with more rolling passes, even with the steep gradients.

Nevertheless, the sports managers were not in a mood to praise.  Mario Chiesa, irritated by the hesitancy of his riders, made his displeasure clear.  Honestly, I thought that the big teams who are fighting for the overall classification would take up the pursuit on their own, Chiesa said.  Unfortunately, the day did not unfold like that.  We wanted to get into the breakaway with Larry Warbasse.  The team did not do the work required.  Friday Sylvain Chavanel and Jerome Coppel were already very active so we could not overtax them.  It is true that we have only six riders still racing, but that cannot be used as an excuse to be absent on a day like this.  The positive point is that IAM Cycling can really count on riders like Jérôme Coppel, for example, who is feeling better day after day.  I am sure he will have the opportunity to shine by the end of the Vuelta.