Vuelta a España – Stage 4 – Thomas Degand – Once you had your position, I won’t say that the rest was easy, but you were at least free to do a good climb – 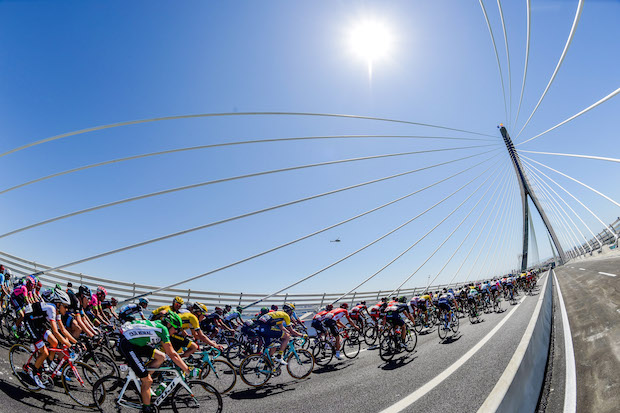 The famous white villages of Andalusia are as hard to access as they are beautiful.  Perched on top of a rocky outcrop, Vejer de la Frontera demanded panache and determination from the riders, all of whom were forced to put up with the heat.  There are a number of superlatives that could be attached to Alejandro Valverde (Movistar), who only a few months ago was the winner at the top of the Mur de Huy, which is a climb similar to the one faced today.  In the Spanish finale Tuesday, the gradient of around 15% was not enough to stop Valverde from coming out on top ahead of Peter Sagan (Tinkoff – Saxo) and Daniel Moreno (Katusha). Esteban Chaves (Orica GreenEDGE), who once again rode very well in the final kilometers, managed to hang onto his leaders red jersey.  As for the IAM Cycling team, the dry slopes of the Andalusian town proved not to be as fertile for the group as originally hoped.  Disappointed, the Swiss squad will look to the coming days for more opportunities to distinguish themselves at this Vuelta. 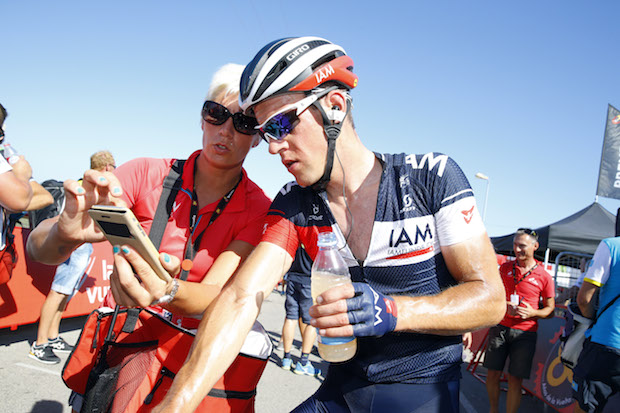 The final five kilometers of the fourth stage were not supposed to accommodate the bulk of the pack at once. The narrow roads with sharp turns coming before the stiff climb that would lead up to the finish line ensured that a particular selection would be made. IAM Cyclings Thomas Degand explained how it happened: The stage was long, with 210 kilometers ticking past, and the breakaway built up a 14 minute advantage.  All these things contributed to a very hard and fast second half of the stage. “

“Then to make matters worse, we had to climb that super steep wall in the final.  Positioning was very important.  There was a huge fight to be in the right place.  The hard part was to get yourself a good spot at the base of the climb, which of course all the big teams wanted, so it was not an easy task to be among them.  Once you had your place, I wont say that the rest was easy, but you were at least free to do a good climb.  At the foot of the ascent, the peloton quickly broke apart, and I just went up at my own tempo.  My legs feel good and everything is getting better day by day.  So that bodes well for the rest of this Vuelta.

Eddy Seigneur, IAM Cyclings directeur sportif along with Mario Chiesa, is indeed looking ahead to the future stages with high hopes for his teams performance.  We agreed this morning to pay attention to join the riders in the break, which was sure to be a large one, Seigneur explained.  But we didnt managed to place one of our guys among them.  Then we started to focus on working for Vicente Reynes with a view to the final, but the climb was definitely a lot harder than he thought.  Obviously many teams came to the same conclusion.  Were naturally a little bit disappointed, but there are still plenty of stages where we can take part in the action and be up front. In the end, we were not overly surprised by this final climb because the profile in the road book clearly indicates the percentages, which did in fact scare a good portion of the peloton.  The proof of this is clear when you look at the stage classification; there are all the big favorites at the head.