Since 2014, global economic growth has remained anemic and continues to hover doggedly around an annualized rate of no more than 3%. This lack of vigor fuels fears of “secular stagnation” and of structural under-utilization of production capacity resulting in very low inflation, or deflationary pressures. However, although GDP growth continued to disappoint, we have a more constructive vision of the global situation, and anticipate a (slight) increase in activity in 2017.

First, the job market has improved globally. Though some regions, including southern Europe, still suffer from high unemployment, places like northern Europe and especially the United States have made great progress, and are now close to full employment. Second, we consider concerns about deflationary pressures to be exaggerated. In fact, in most developed economies, inflation excluding energy and food, remained stable and has oscillated in the same fluctuation band since the late 1990s. Consequently, there is no deterioration of the situation. Rather, the increase in health costs and rising wages in the US could even instigate the beginning of inflationary pressures. Third, the downturn of last year was partly due to tighter global financial conditions following the strong rise in the dollar as well as budgetary contractions. Today, these negative effects have been curbed, so we can start talking about budgetary expansion and infrastructure spending, which should unlock the potential for recovery in developed countries as well as some emerging market industries. Finally, global growth could rise to 3.5% in 2017. Although this is still below the long term average, this development does refute the secular stagnation theories.

In the short term, the greatest risks to our more optimistic scenario are political, of course with the US presidential election. In the long term, risks include an abrupt skid in the rebalancing of the Chinese economy, and the resurgence of tensions within the EU, notably in the context of eventual negotiations regarding the Brexit. To that we can also add the small but increasing risk of the US economy overheating. However, to prevent this from happening, it is likely that the Fed will raise its rates by the year-end 2016, and subsequently adopt a gradualist and conservative approach.

Management activity in this period and future strategy

The fund changed its strategic allocation to overweight cyclicals and to become neutral in the gold sector. In fact, thanks to reassuring economic statistics regarding the situation in China, the price of industrial metals has recovered well. In addition to that, the influx of supply that many feared, particularly in copper, never materialized. Moreover, the agreement by OPEC to reduce oil production, although its implementation remains subject to question, has restored some stability to the market. Regarding gold, following its remarkable rally since the beginning of the year, we decided to reduce our positions. We believe that in the medium term, there will be no new catalysts that could fuel the rise of gold. Low interest rates and the US dollar have already been largely factored into the current prices. However, we remain optimistic in this segment, while focusing on the more conservatively run companies.

Evolution of the main precious metals (USD, rebased to 100) 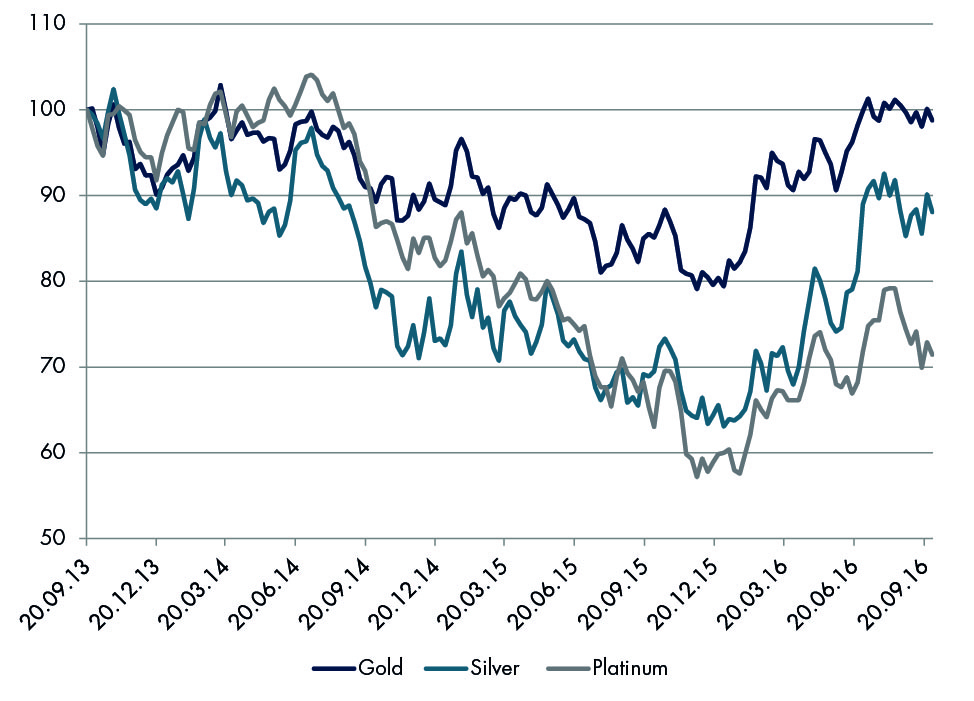 Evolution of the main industrial metals (USD, rebased to 100) 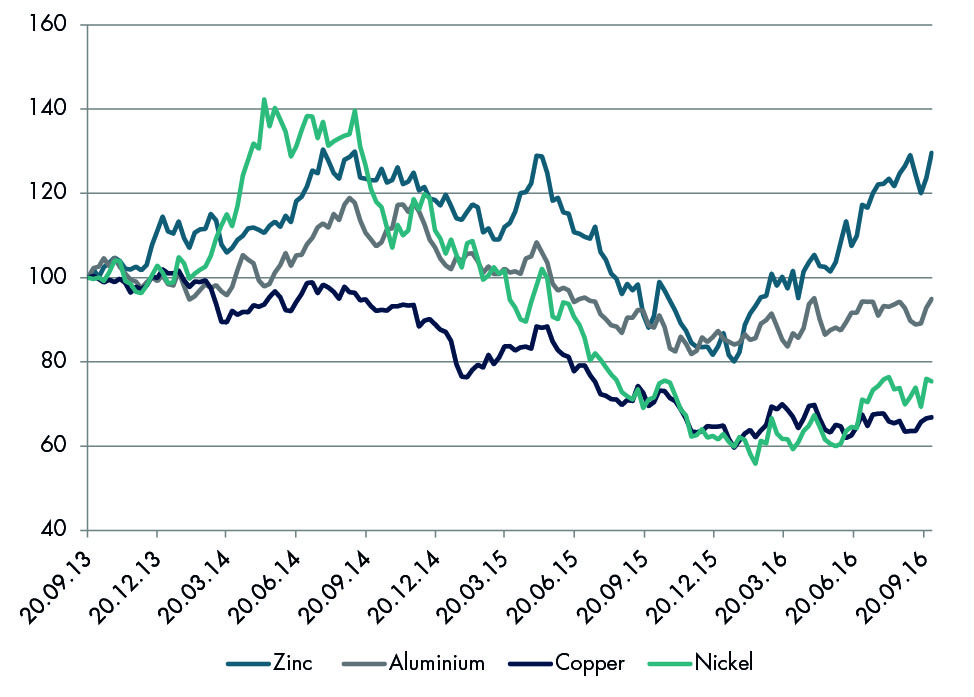