Tour of Britain – Stage 6 – Stef Clement – From my perspective, this was one of the hardest stages of the season, and we were not even able to make a try for the win in the final –

Monotony has not been a problem at the Tour of Britain.  Every day, all the main players at this British event have done their bit to offer the ever enthusiastic public a great show in the midst of this great cycling movement.  The sixth stage from Stoke-on-Trent to Nottingham covered nearly 200 kilometers and was hardly the exception that proved the rule.  In the end, Matteo Trentin (Etixx-Quickstep) trumped overall leader Edvald Boasson Hagen (MTN-Qhubeka) in a sprint out of a decimated group. The small group of some thirty riders, including IAM Cyclings Stef Clement and Stefan Denifl, arrived on the heels of the leading duo, but could not challenge for the victory ahead of the Italian on the Belgian team.  The main pack then inherited the role of gruppetto.  In spite of the fact that they were 45’47” behind the lead group, and under normal circumstances would have been outside the time limit, the 74 trapped riders will nevertheless be able to start the race on Saturday at the acquiescence of the jury commissioners.  For the credibility of the event, a field of barely thirty riders would hardly be acceptable and cause an unwanted shadow. 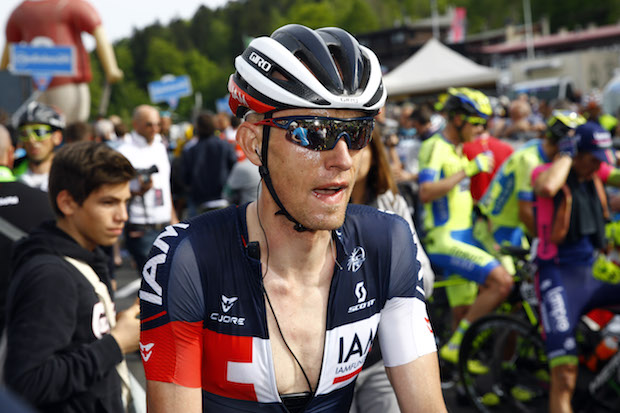 At the time of explanation, Stef Clement (16th) stressed the difficulty of the day, which included practically no sections of flat road.  From my perspective, this was one of the hardest stages of the season, and we were not even able to make a try for the win in the final.  The selection was made following a crash that happened shortly after the start.  Stefan and I found a place in the best group, and as Sky was riding for Wout Poels, we were able to stay sheltered with the idea of playing our card for the finish.  But we never managed to influence the race.  It was never possible to strike out alone.

Meanwhile Stefan Denifl (19th) did not contradict his teammates assessment: It was a strange stage on hard roads that were always going up and down.  We never had a break.  We were riding à bloc the whole day, and in the final Boasson Hagen found the resources to attack.  Personally, I was already just glad that I had made that front group.

Kjell Carlström, IAM Cycling directeur sportif for the Tour of Britain along with Rubens Bertogliati, was satisfied with his riders on this stage, which has been like no other.  Everything was basically decided after just 20 kilometers.  Nervousness and a crash caused the massive split.  Those behind never got back up to the front.  I asked the guys to be alert throughout the day.  So I am happy that we still arrived at the finish with Stef Clement and Stefan Denifl in the chasing group although I would have liked to have seen Sondre Holst Enger also there for the sprint.  Now the question is how we will finish up this race.  Normally, the last two stages should be for the sprinters.  But for this you have to hope that the peloton that fell outside the time limit will be allowed to take the start despite the fact that they reached the finish line so late.