There are many different measures for the valuation of equity markets. One of them is the cyclically adjusted price earnings ratio – CAPE, which was developed by Robert Shiller, 2013 Nobel Prize winner in economics.

The CAPE is calculated by dividing the share price by the average of ten years of earnings. The lower the ratio, the cheaper the stocks are, the higher the ratio, the more are investors willing to pay for a company and its earnings.

It is interesting to observe the development of the CAPE in different regions over a longer period of time. The chart below shows that Swiss equities (dark blue line) have over most periods been valued higher than the US (green blue line) and Europe (grey line).

It is even more interesting to compare the CAPE of Europe with the US. Prior to the financial crisis in 2009, their path was very similar. Following the financial crisis, the US however recovered much quicker than the rest of the world and has since then not stopped its rally. Looking at the CAPE for the US market today, it is since 2016 higher than the traditionally more expensive Swiss market and has left the CAPE for Europe well behind since 2012. The CAPE for Europe very well reflects the moderate progress European markets have done over the last years as well as the formidable potential these markets have compared to the US. This has led us to currently be significantly underweight US stocks, while overweighting Europe. 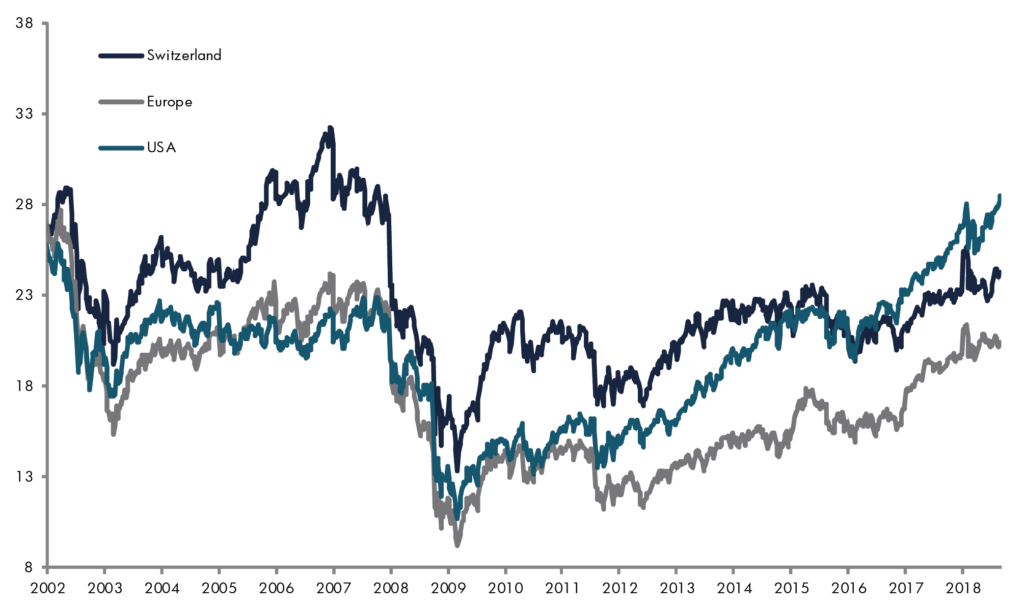