Since the beginning of the season, IAM Cycling has emphasized that its strength is in how well it works as a team.  That is something that the Swiss squad has demonstrated quite impressively in todays first stage by placing three of its riders in the top-10. Matthias Brändle, Dries Devenyns, and Reto Hollenstein finished third, fourth and fifth, respectively, in the non-typical prologue that opened the Eurométropole Tour. Alexis Gougeard (AG2R La Mondiale) managed to put in a stronger time to take the stage win and the race lead.  Fresh off the Vuelta where he won in the streets of Avila, the young French rider ably out-performed the competition to set the fastest time at the top of Mont Saint-Aubert.  As a member of Vincent Lavenus AG2R La Mondiale team, he will be pleased to be in the leaders jersey for the second stage, though IAM Cycling has earned the lead in the team classification while, for the moment, Matthias Brändle will keep the best young riders jersey warm for Gougeard. 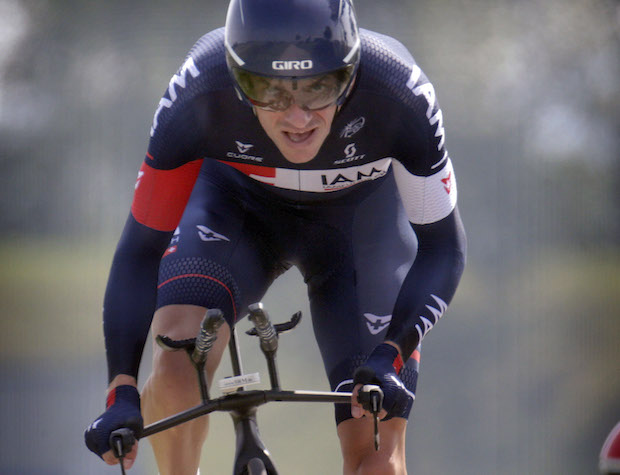 After having recovered from his efforts, Brändle, who is a former world hour record holder, was keen to discuss his impressions on this first day of racing.  Torn between satisfaction and disappointment having found himself just on the edge of victory in the type of race that he likes, Brändle was in a mood to be optimistic for the rest of the race.  “I felt good during the prologue, but I would still like to have won this stage, the Austrian explained.  I suffered in the wind, but that is hardly an excuse since everyone had a similar experience.  The last three kilometers were the most difficult for me because it was a slightly false flat leading into the finishing section on the steep slope of Mont Saint-Aubert. Given my size, this was clearly not an ideal course for me.  But third place is motivating in view of the stages to come.  I would like to keep my place in the general classification.  I realize that this goal will not be easy to accomplish because other teams will be trying to control the race.  But if we can, as a team, win a stage, and then I can stay within the top-5, I will be very happy.

Thierry Marichal, directeur sportif alongside Mario Chiesa, shares in his riders positive analysis.  For the Belgian Marichal, the days success does not only rest with Brändles third place, but with the strong performances that all the teams riders managed.  I am satisfied with the teams results today, although to be perfectly honest, I would have preferred a win outright, Marichal explained.  But taking a moment to analyze Matthias time, we must recognize that this was not a course that was easy for him, and he still managed to give the absolute best of himself.  This type of finish really did not suit him.  Then, the overall assessment must be that we have definitely come to the Eurométropole Tour with a strong team.  The proof is that we have five men in the top-15, including three in the top-10.  Now we must show our solidarity in the next stages to keep the spirit of the team high and place ourselves well in the general classification.  For me, everything is still possible in this race for us, and nothing is ever finished until you cross the line.